When the Nazis took power, Rudolf remained partially safe as an Austrian citizen. However, when the Nazis annexed Austria on March 12, 1938 (Anschluss Österreichs), and after Kristallnacht on November 9, 1938, Rudolf knew he was no longer safe in Nazi-occupied territory.

However, though Rudolf was Jewish, he retained connections with influential people in Nazi circles, mostly through his wife Frida Leider, who was not Jewish. One of the main connections that Rudolf held was through Frida Leider's relationship to Winifred Wagner. Leider and Wagner worked together because of the Bayreuth Festival, which Wagner ran and at which Leider performed. Their professional and personal relationship aided Deman, Leider, and Hans-Eduard throughout the Nazi era.

Winifred Wagner was a close friend of Adolf Hitler and was rumoured to be his lover for a period of time. Besides the Winifred-connection, Hitler himself was a fan of Frida Leider - he sent her flowers and awarded her a medal during his time in power, while ignoring her connection to"Jewishness", through her marriage to Rudolf. Frida Leider herself and her link to Winifred Wagner offered Rudolf Deman as well as Hans-Eduard protection within the Third Reich that was not offered to other Jews. Hans-Eduard, a "half-Jew" in the Nazi classification system, was offered employment by Winifred Wagner at the Bayreuth Festival as her secretary. Besides offering financial security to Hans-Eduard during a time where other employment avenues were closed, the association with Winifred Wagner afforded Hans-Eduard security of life, which, to be expanded on in more detail later, ended up freeing him from the Gestapo. 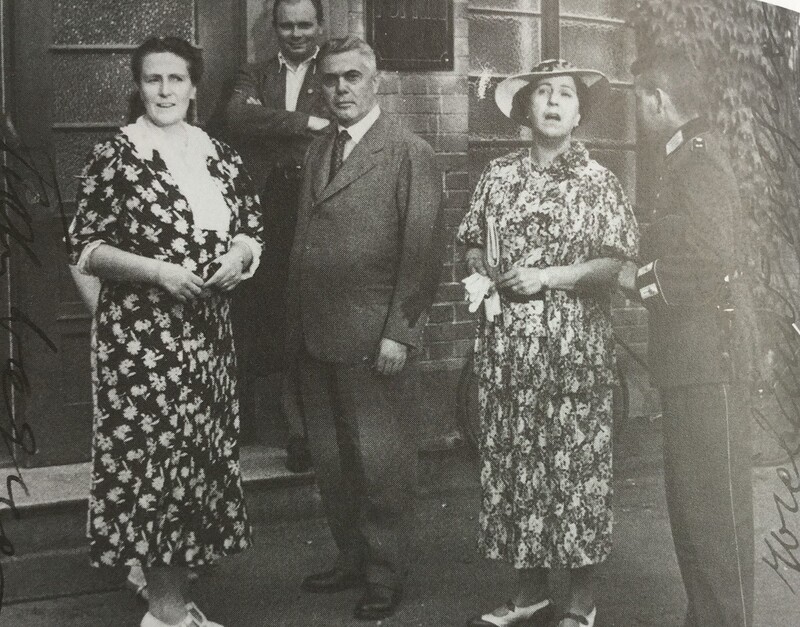 Rudolf Deman, unlike his son, made the decision to flee Germany to Switzerland shortly after Kristallnacht in November 1938, on a tourist visa, where he remained until after the end of the war in 1946. Frida supported him financially during that time, as tourists were not allowed to work in Switzerland. Besides the financial dangers of living in exile, Rudolf also was monitored by the Swiss police, as a Jewish Austrian on a tourist visa. Furthermore, he would receive terrible news about the fate of certain family members who were unable to escape Nazi Germany while he was abroad.

Frida faced mounting pressure within Nazi Germany to divorce her Jewish husband, something she had initially refused to do under Nazi racial law. This move eventually ended her career that had grown since the 1920s, as she sang in her last true opera in 1942.  In 1943, the couple was officially divorced in Germany, however, they remained a couple, remarried after the war, and remained married for the rest of Rudolf's life (Frida outlived him by fifteen years). 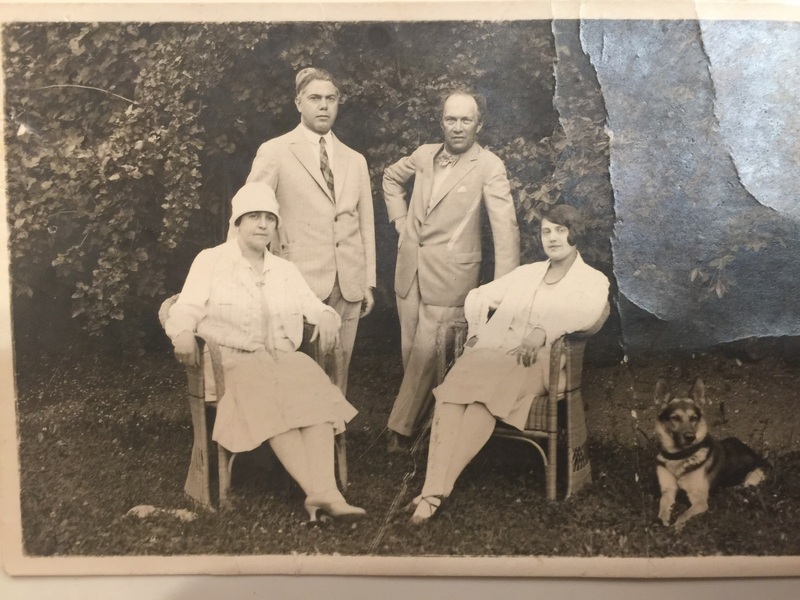 Frida and Rudolf, Before the War

Frida and Rudolf are on the left-hand side.

Though Rudolf survived the Holocaust in exile, the same was not true for all the members of his family. Rudolf's brother Ludwig's first wife Emma, as well as their son, Robert, both were killed in 1942 during the Holocaust. The brother of Ludwig's second wife Salie Rosa, named Sigmund, was murdered at Treblinka in 1942. Another one of Rudolf's brothers, Leopold, was murdered in 1942 at Maly Trostenets, a Nazi extermination site near Minsk.

However, a close family member of Rudolf who survived the Holocaust was his only son, Hans-Eduard, from his first marriage to Edith Deman-Delkamp (née Ausfeld). 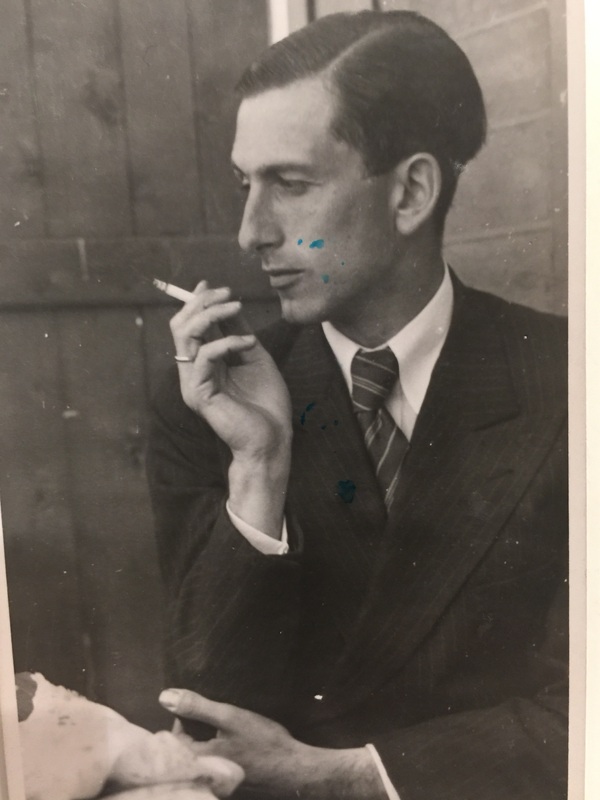 Under the Nazi classification system set out in the Nuremberg Laws of 1935, Hans-Eduard was considered a "half-Jew" (Mischling ersten Grades). His father was Jewish and his mother was non-Jewish. Over the course of Nazi rule, Hans-Eduard lost the ability to work professionally, as a "Mischling" could not work within Nazi Germany. Winifred Wagner gave Hans-Eduard employment at the Bayreuth Festival as her secretary when this occurred, allowing him to remain employed when other options closed to him. This move by Wagner also protected Hans-Eduard by putting him in close association (and employment) with her as a dear friend of Adolf Hitler.

In July 1941, Hans-Eduard managed to join the German army (German: Wehrmacht), through a combination of forging his papers and the Winifred Wagner connection. He was initially drafted as a driver in the Polish town of Żary (German: Sorau). In the fall of that same year, Hans-Eduard went to Russia where he served as a solider on the eastern front. He was assigned to a propaganda unit (German: Propagandakompanie), where he shot propaganda footage due to his experience working as a photographer before the war. On the order of Nazi propaganda minister Joseph Goebbels, German tanks had to travel from the left to the right of the screen in propaganda films, giving the visual illusion that the tanks were always advancing. Therefore, cameramen had to film up close and on specific sides of the tanks to get the appropriate shots. This job was incredibly dangerous given the necessary proximity to battle required to get the "action shots" that Goebbels wanted for propaganda reels. Due to Hans-Eduard's precarious status as a half-Jew (German: Mischling ersten Grades), he could not become an officer or be promoted within the ranks.

Hans-Eduard served on the Russian front until January 1944, before returning briefly to Germany. He was then sent to the Greek island of Korfu in July 1944.

Over the course of the war, Hans-Eduard was captured by the Gestapo. He was held and tortured for 12 days, until his connection to Winifred Wagner once again offered him protection and allowed for his release. After his experience with the Gestapo, Hans-Eduard made the risky decision in October 1944 to cross enemy lines and join the British war effort. He was sent to Egypt, and served in British-controlled re-education camps for German P.O.W.s.

Given the nature of his work in the British camps and because he had "crossed the lines" before the end of the war, Hans-Eduard was considered "uncompromised" by Nazism after the fall of the Third Reich. Therefore, he was able to work in the German foreign office and helped set up the language service (German: Sprachendienst), and from there, he went on to work as a German consul. 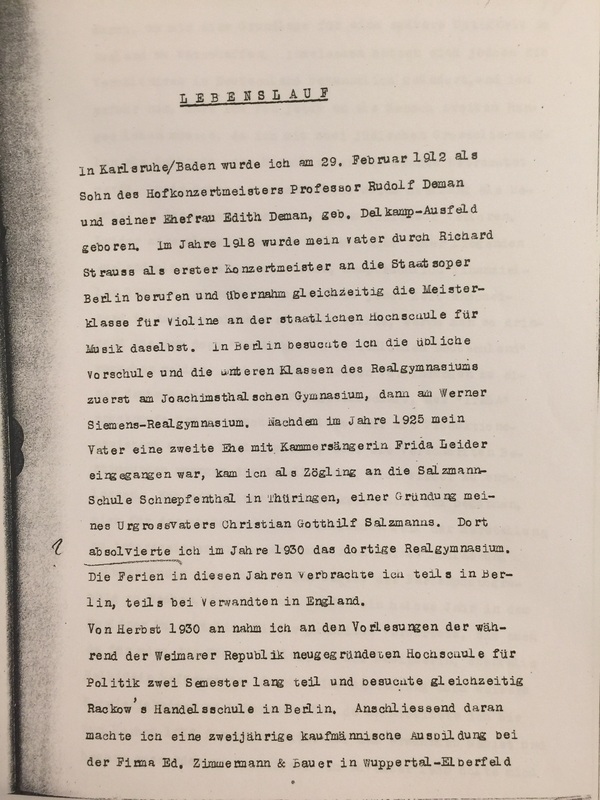 Hans-Eduard's CV from after the war (1949). Interestingly, two of his references are novelist Heinrich Spoerl and Hitler's personal interpreter Paul Schmidt. The third reference is George Harcourt Vanden-Bampde-Johnstone, the 3rd Baron Derwent. 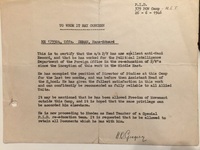 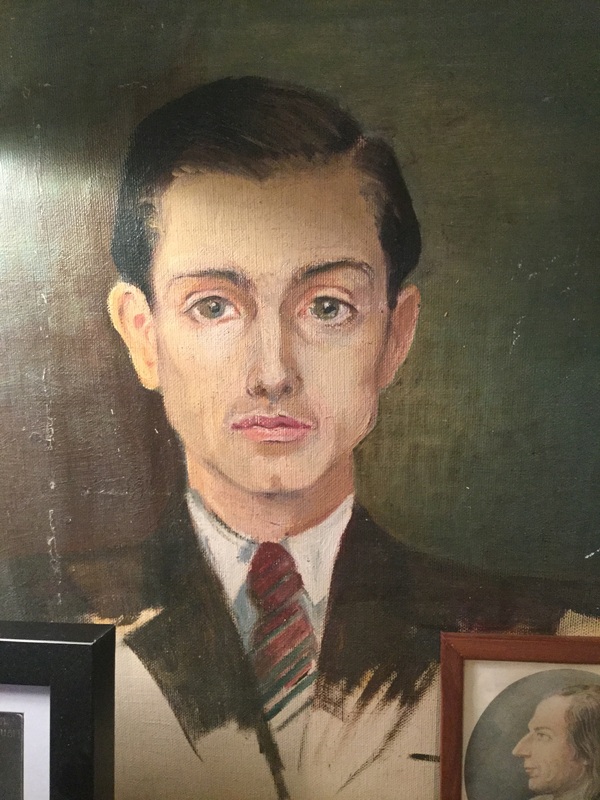