Julius Maslovat was born as Yidele Henechowicz in 1942 in Piotrkow, Poland, three years into Germany’s invasion of Poland and the beginning of the Second World War. Because of the amazing sacrifice of his mother, the dedication of his father, and care from other people, he survived the war, he was three years old at the time of liberation. His story during the Holocaust can be found in the film: Why Am I Here? A Child's Journey Through the Holocaust. The trailer can be viewed on the right. However, this page will focus on the research process of Julius finding out his story and building it to what we now know it to be. It will focus on various documents that he found, and some of which are connected to people who were instrumental in his life. Many of the documents on the page are connected to a 36-minute interview that Julius and I did together, you can find the whole interview at this link: https://www.youtube.com/watch?v=c1j8bIVAZA4

Putting the Puzzle Together... 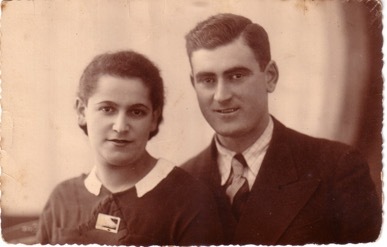 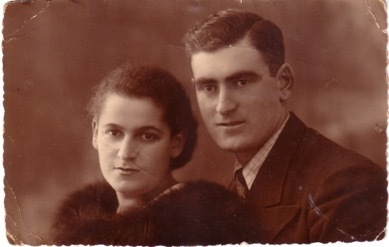 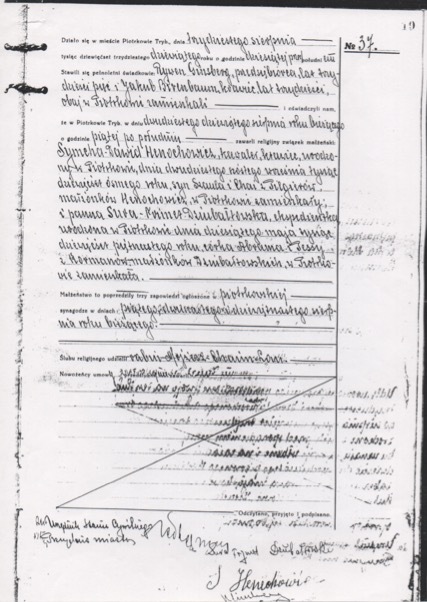 This is the marriage certificate of Sala and Symcha Dawid Henochowicz, click on the image to see its translation. They were married in the town of Piotrków, Poland, on 30 August 1939. They are the parents of Julius Maslovat. The couple is shown in the images above. Behind each image is an inscription written by Sala in Yiddish, an element that gives depth into the personality of Sala more so than just the photo itself. It demonstrates how she wrote, her “sophistication” as Julius mentions during our interview. Receiving the photographs with the inscriptions was especially meaningful to him because they provided a connection to the family he had lost at a young age. To hear more about the photographs, listen below. 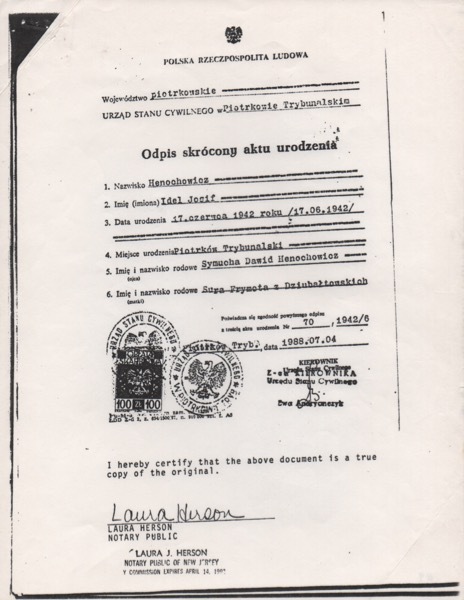 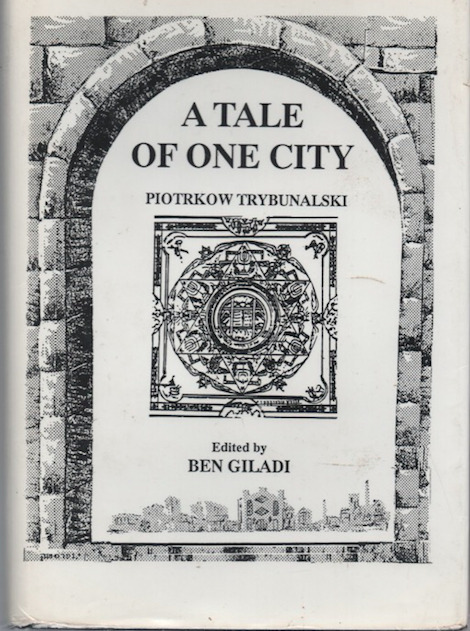 The edited book, A Tale of One City: Piotrków Trybunalski, by Ben Giladi and Julius Maslovat’s birth certificate are akin to one another as they are both representative of a “beginning.” The birth certificate is the beginning of Julius’ life and the book is that “which got him started” on his own journey of discovery. The article, which is connected to the book, arrived in a “plain brown envelope,” unknown to Julius who was not actively searching for his story; it was a moment “completely out of the blue” and unexpected. Listen below to hear more about how the article influenced Julius to begin his journey. 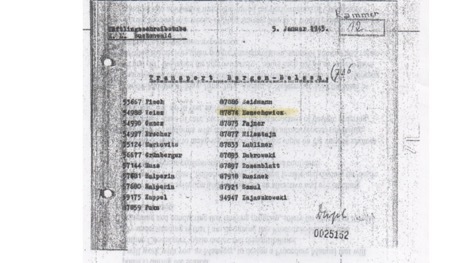 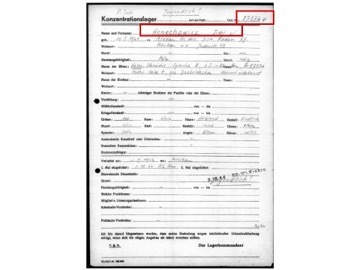 The transportation lists on this page include Julius’ transportation from Piotrków to Buchenwald Concentration Camp and then from Buchenwald to Bergen-Belsen. On the lists his name can be found with the number 87874. These documents are not only important in considering Julius’ story itself, but they are instrumental in the understanding of memory. One memory in particular remains present in Julius’ mind, that which centers around his transportation to Bergen-Belsen.  Coby Lubliner, one of the children on the same transport list as Julius and someone who has been helpful in this research process, remembers the transport in a closed cattle car. Julius remembers this differently. His memory of the transport was in that of an open cattle car. Listen below to hear what Julius had to say about the memory of his transportation to Bergen-Belsen from Buchenwald. 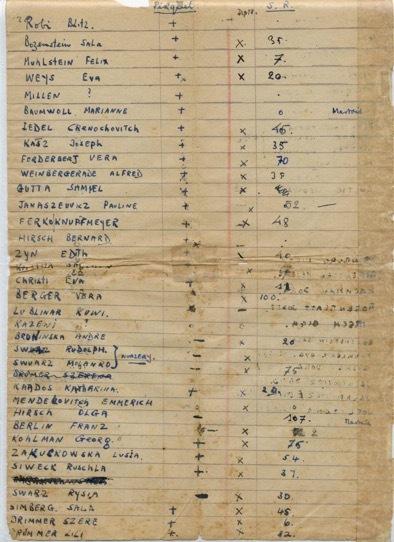 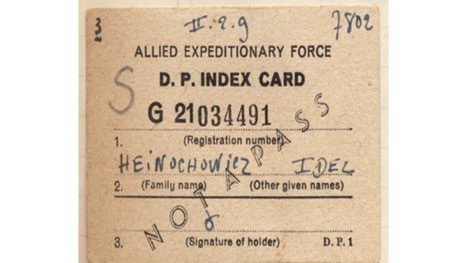 The documents above are some of Julius’ personal documents: his tuberculosis (TB) test and his displaced persons (DP) card. Interestingly, these documents may be “personal” but Julius did not come across them in his own files. He noticed his DP card when reading some of the books he had received from Bergen-Belsen concentration camp after his visit in 2010. The DP card was found on the same page as his Victorian neighbor Bob Boekbinder’s card. This moment of discovery, like many in Julius’ story of research, was unexpected and by chance as it was unknown to Julius that his DP card even existed. The card was donated by Annie Bonsel, a red cross nurse who had gone to Bergen-Belsen right after its liberation. In an interview she did, they discussed her donations to the now museum, among which was a scrapbook on her experiences at Bergen-Belsen. The scrapbook included Julius’ TB test results (the document on the left of the page). Julius’ last thought of Annie before she died was of thanks; he thanked her for taking care of him. 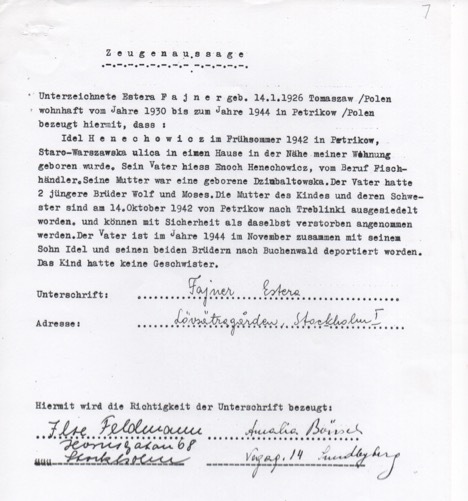 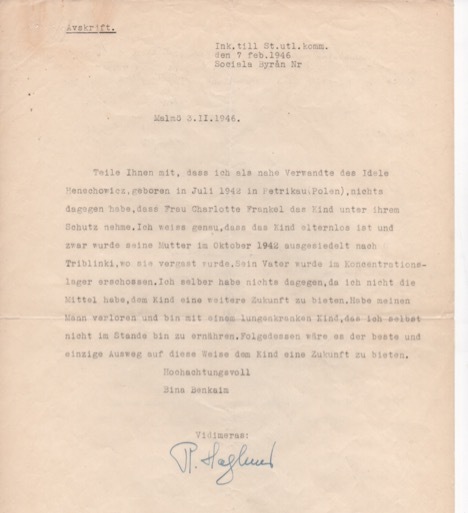 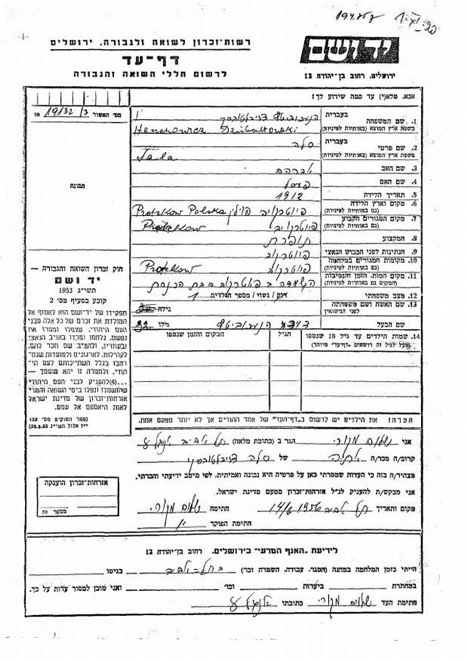 In 2010, Julius took a trip to Berlin, Germany. Here he visited the Memorial to the Murdered Jews of Europe and its museum underneath. The museum had a direct link to Yad Vashem, the Holocaust Archive in Israel. “On a whim,” as he mentions, he looked up information on his parents. He found information on his mother, which was supplied in an affidavit (as indicated above) by a Szolem Makory who claimed to be her brother, and this was not the first time he heard the name. In the 1960s he stayed with the Makorys when he and his parents (Sam and Minna Maslovat) visited Israel. It was unknown to him at the time that they were his family. Julius did eventually find and meet with Yoram Makory after discovering their kinship (Yoram being his cousin). Yoram was instrumental in Julius’ research process; from him he found out that his uncle Szolem (his mother’s brother) left Poland in 1937. Along with him he took a bunch of family photos (including the photos of his parents at the beginning of the exhibit). To hear more of what Julius says on the Makorys click the audio on the left.

Estera Fajner (now Tusia Jablonski), originally from Piotrków, was living in Sweden at the time that Sam and Minna Maslovat were looking to adopt Julius. She provided an affidavit which stated that Julius was an orphan and could be adopted. She was also in the Kinderheim at Bergen-Belsen and proved to be an instrumental person in Julius’ path of discovery.  To hear more on what Julius says about Estera Fajner, click the audio on the left. She was the one who gave Julius Luba’s information. Luba Tryszynska was one of the women responsible for running the Kinderheim from November 1944 until liberation in April 1945; Julius was among the many children that she cared for.  The song Luba sang to the children as a lullaby, “Der Alef Beis Velt” is one of the few memories Julius has from his time during the Holocaust.

Bina Benkaim was born in Lodz in 1910 and claimed to be Julius’ mother’s cousin. She survived Bergen-Belsen and ended up in Sweden where she, like Estera Fajner, testified through an affidavit that Julius was an orphan and could be adopted. Listen to the audio clip to the left to hear more of what Julius had to say about finding and meeting Bina Benkaim. 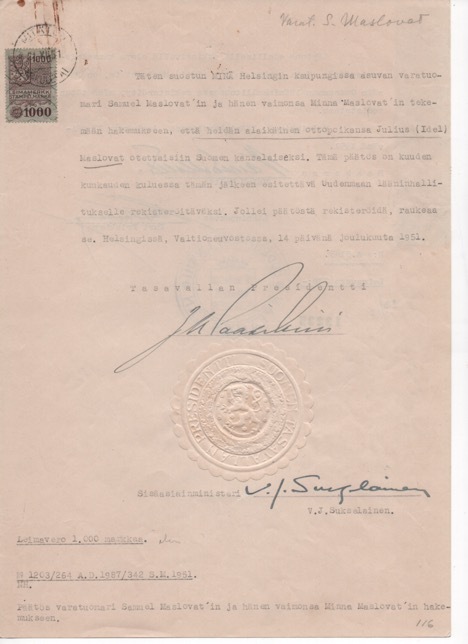 This exhibit closes with Julius’ document for Finnish citizenship, alluding to the closing of a chapter and the beginning of a new one.  Julius was among the only 5,000 children under the age of 16 who survived the Holocaust. This exhibit documents the items that were essential in his research of discovering and piecing together this story, or the "jigsaw puzzle" as he calls it. This exhibit is but a piece of a larger journey of discovery and a story of survival at such a young age.

Collaboration on and Construction of the Exhibit

Julius and I wanted to find a new approach to his story, one that he hadn't told before, one that would be new and interesting to the viewer. I heard Julius tell his story a number of times throughout my degree, and each time I felt I learned something new, something he hadn't shared before. This led me to want to understand the research: every step, person, and document that led him to putting together the puzzle.  Our teamwork focused on tying in documents and stories, while simultaneously taking the viewer on a journey through this process.

From the process, and working with Julius, I learned much about who I want to be as an academic, that is that we don't always find everything that we actively search for, but a lot of the time we find things when we don't expect them that are "out of the blue." Unexpectedness was foundational, in some ways, to Julius' process of discovery and allowed me to be more open to a common word which I often pass over: serendipity. 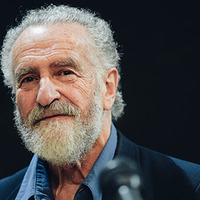 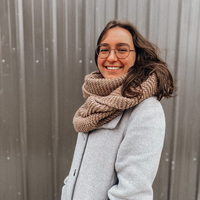 Julius Maslovat was four years old when he was liberated from Bergen-Belsen in April 1945. He was soon adopted by Minna and Sam Maslovat and grew up in Finland. He is a trained engineer, as well as an artist. After immigrating to Canada and establishing himself in British Columbia he became involved in the art community.  He is now living in Victoria where he continues to share his story with a variety of audiences, such as students, in the hopes that people become more engaged with our world. Julius is also an avid cyclist and a strong advocate for the environment. He is constantly finding more information (if only small tid-bits) about his story.  He is continually "pulling the thread" to unravel more about his life during the war. To read more about Julius, you can find some information at this link, posted by the University of Victoria before the premiere of his film: https://www.uvic.ca/humanities/news/current/maslovat-doco-jewish-film-fest.php

In collaboration, through a one-on-one process, Julius and I (Ireland Good) worked on this project together. I am a fourth-year undergraduate at UVic majoring in History and Germanic Studies, focusing specifically on Holocaust Studies.  My journey in this area of study truly began when I heard Julius speak for the first time, I was then in my first year. Not long after his talk, I participated on the 2018 I-witness Field School, led by Dr. Helga Thorson. It was here that I began to learn more about the continuation of Holocaust memory and the stories that accompany them. This project was an incredible end to a cycle, which started with me listening to Julius' story  to working personally with him to tell a new  aspect to what I heard three years ago. I have learned a lot from this process, and I am excited to continue learning as I embark on my masters this coming fall.