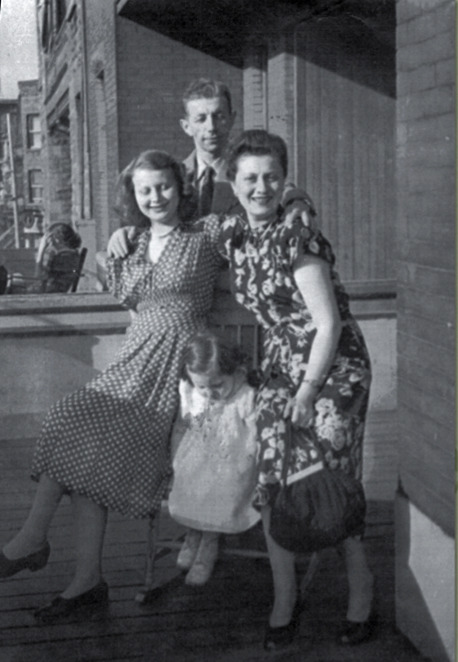 Photograph of the Boraks family following emigration to Canada. Clockwise from the top: Stanisław, Wanda, Daeniela, and Lillian.

Having obtained some food and with Wanda’s pregnancy progressing, Lillian and her mother decided it was time to leave the village and head back to Warsaw where they hoped to find Stanisław. Although train usage was restricted for civilians, Lillian recalls Russian soldiers making an exception for her mother when they realized that she was pregnant.

The train was populated by Russian soldiers who Lillian remembers as being drunk and impudent, incessantly pawing at her mother. One soldier offered them refuge in his section of the train only in an attempt to have privacy with Wanda. Each time he made an advance, Lillian remembers screaming until he would pull away. This continued throughout the night.

Upon returning to Warsaw, Lillian and Wanda found the city in ruins. Despite many streets rendered completely unwalkable, Wanda located a familiar building where she believed they would eventually encounter Lillian’s father. It wasn’t long before Stanisław arrived and they made their way out east toward Praga.

Through the aid of old friends, Stanisław was able to find his family safe lodgings in an abandoned apartment building that had remained relatively safe. However, this wasn’t the case for many other families in Poland. Lillian remembers seeing friends living in buildings with missing walls or staircases so badly damaged that they were suspended in the air, swinging as they were walked on. The air of danger persisted as fear of German forces was replaced by the fear of Russian soldiers and encountering unexploded bombs.

After Wanda gave birth to Lillian’s sister, Daeniela, Stanisław found a job with the provisional government that was established during the pre-Communist period and the family moved back to Warsaw. Although Poland was determined to get Warsaw back on its feet by gradually reopening schools and theatres, the population still suffered and unrest was common. It wasn’t unusual to come across wounded soldiers in the streets or see civilians fighting as they clamoured to see the Russian films shown in the cinema.

Click to hear Lillian discuss the impact that childhood trauma from the Holocaust had on her relationships moving forward into adulthood.

As 1945 moved forward, Wanda continued feeling discontent with her life in the ravaged city. Surrounded by ruins, having lost nearly her entire extended family in the Holocaust, and on the cusp of Soviet take-over, there was nothing left for Wanda among the rubble. When she was contacted by her brother, Bronek Jastrzębski -- who had emigrated to New York in 1939 -- she convinced her husband to accept Bronek’s offer to help the Boraks emigrate to the United States.

With some reluctance, Stanisław was able to acquire plane tickets for his family to travel to Sweden, where they would receive affidavits to enter the United States with guest visas. From Sweden, their journey continued across the Atlantic on a ship guided by another boat that scanned the waters for unexploded mines. 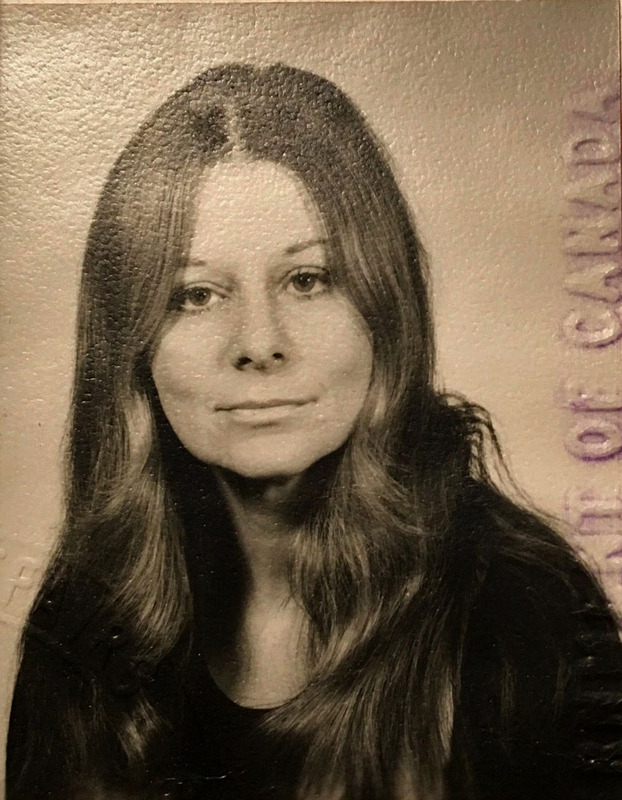 Photograph of Lillian from her Canadian passport several decades after emigrating to Canada.

After some negotiation, the Boraks family was allowed to enter the United States and begin their lives anew. Lillian was enrolled in school and, despite only speaking Polish and lacking a formal childhood education, she had managed to learn the American national anthem and the Christian prayers taught within public schools.

This new life came to a quick end as the American immigration requirements demanded that they live outside of the United States before acquiring landed immigrant status. Of their two options -- Canada or Cuba -- the Boraks family felt Canada would be the better option. Uprooted once again, Lillian and her family moved to Montreal in the summer of 1946.

Aided by Wanda’s brother and his friends, the Boraks family found temporary housing in Montreal and attempted yet another fresh start in a new country. During the first year in Canada, Lillian was bounced through six different schools, without any success in her studies. Lillian recalls being offered no educational support as she struggled to learn English and catch up on six years of formal education that she had been deprived of during the Holocaust. Before she had a chance to grapple with the past eight years of her life in Poland, Lillian was once again cast into a world where she was estranged and considered inferior. Any stability she may have begun to find in Montreal was shattered again as high housing costs of Montreal pushed the Boraks family into the countryside of Cornwall, Ontario.

During the year spent in Cornwall, Lillian saw through her first full year of Canadian public school. She continued to fumble her way through without any additional support to help her overcome the language barrier and her lost years of math and science education. While Lillian still felt estranged and isolated, she also recalls feeling a shift in personality as she slowly learned to speak English. Reaching back to the charming and exuberant Lillian of the pre-war years, she donned the visage of an entertainer who regaled her classmates with elaborate tales of a fictitious history. As her English skills developed, Lillian could become anyone she wanted, such as a princess with acres of land awaiting her back in Poland. For the time being, Lillian’s origin stories remained fictitious and it would be many years before that would change.

After a year in Cornwall, Stanisław discovered that a tumour had developed following -- or as a result of -- his injury as a woodsman back in Głosków. In the months of chaos and disorder that followed his injury, the tumour went without notice as it became malignant and now required medical treatment unavailable in the countryside. Yet again, tragedy uprooted the Boraks family and they travelled back to Montreal.

The Boraks family found accommodations in the Saint-Laurent area of Montreal and it wasn’t long before Wanda developed a social circle with other Jewish families. Shortly after, Lillian was enrolled in Baron Byng High School, which was a predominantly Jewish school up until the 1960s. For the first time since the war, Lillian and her family no longer felt the need to hide their Jewish background. This newfound sense of security was shattered when, in 1949, Lillian’s father succumbed to cancer.

After her emigration to Canada, Wanda had rekindled a relationship with a friend from Poland who had also survived the Holocaust and emigrated to Vancouver. With both of them newly widowed and in need of companionship, this relationship became romantic and they were quickly married. Wanda and Daeniela moved to the West Coast to live with her new husband, Walter Melamed, while Lillian chose to remain with friends in Montreal while she attended school.

By the time Lillian joined her mother and sister in Vancouver, she felt they had developed a familial bond that she stood outside of. Having been close to her father and deeply affected by his loss, this new family structure became difficult to reconcile. Bombarded by one change after another, Lillian was encouraged by her family and Canadian society to just keep moving forward and to leave the past behind her.

Before having an opportunity to adjust to a new life with her mother’s husband in Vancouver, Lillian was enrolled in St. Margaret's School for Girls in Victoria, BC. The feeling of isolation Lillian had been feeling was then exacerbated by the need to hide her Jewish roots once again -- at the suggestion of the administration -- in an attempt to fit into the boarding school she had been enrolled in. Living her life on shifting sands pulled Lillian deeper and deeper into herself. The sensation of impending danger left her constantly on high alert, never feeling safe enough to get to know herself, let alone share her identity with the people around her. Moving into adulthood, Lillian continued to carry this wall with her, separating her from herself as well as from the loved ones that gradually came into her life. Despite her initial difficulties, Lillian graduated from St. Margaret's in 1951.