Born in Warsaw, Poland, Lillian’s memories of her life before the war are ones of a happy childhood and loving parents. Her father, Stanisław Boraks was a prominent corporate lawyer in Warsaw and her mother, Wanda (nee. Jastrzębska), a social and cultured woman who enjoyed cards and theatre. Lillian and her younger sister, Basia, lived with their parents in a beautiful apartment in Warsaw where they were assisted by household staff such as a cook and a nanny. During his career, Stanisław occupied a high position in the Polish legal system and often provided legal advice to departments of municipal governments.

Click to hear Lillian speak about the longterm impacts of how Holocaust trauma impacts a child's sense of self. Video courtesy of the Fortunoff Video Archive for Holocaust Testimony.

Living in an assimilated Jewish family, Lillian recalls a childhood like any other Polish child. Despite recounting her father's struggles against antisemitism during his school years, Lillian's early life was not one where Judaism was a source of conflict among her peers or community. She recalls spending her time on family outings to parks and theatres and describes seeing Shirley Temple films and Disney's Snow White and the Seven Dwarves with her grandfather. Lillian attended a prestigious ballet school in Warsaw where she began learning French and, through her grandmother, became familiar with Russian as well. At home, she had a beautiful room with dresses, toys, and books that she learned to read with the help of her grandfather, Arnold. In the summer, her family would spend time at the Boraks family's villa located in the countryside outside of Warsaw.

Lillian's description of her early life paints a picture of a bright and happy child, surrounded by an engaged and supportive family and with a wealth of opportunity ahead of her. To hold on to this painting throughout the rest of the exhibit is essential in understanding the impact that the persecution of European Jews continued to have on child survivors, long after the end of the war. 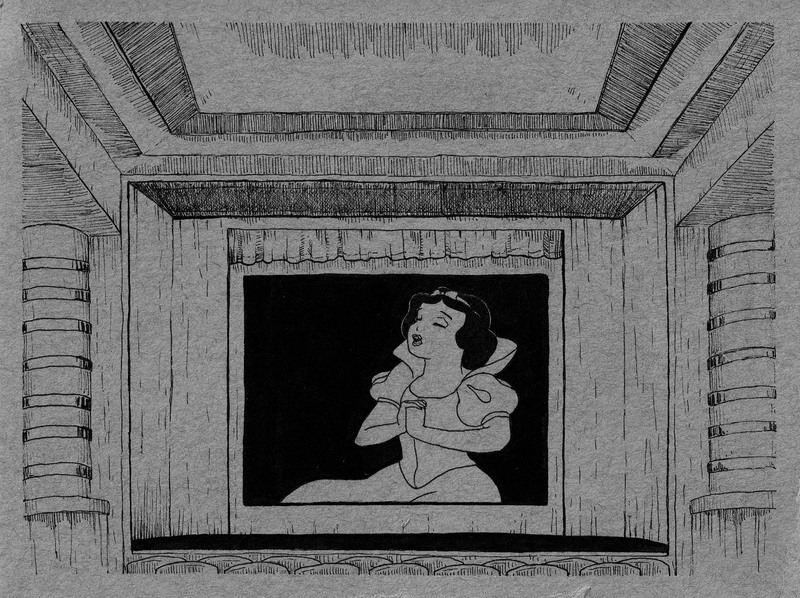 Illustration by SW of Snow White and the Seven Dwarves at the Kino Palladium in Warsaw, Poland.

As tensions continued to rise in Poland, Lillian remembers seeing people beginning to dig ditches and shelters during a trip to her grandfather’s villa. On 1 September 1939, while eating breakfast on the veranda, a fleet of low-flying planes ignited panic in the Polish countryside. As the menacing planes grew louder, Lillian was picked up by her grandfather and rushed into one of the shelters. This pivotal moment of fear and uncertainty demarcates a dramatic shift in Lillian’s life as Poland was invaded -- and quickly annexed -- by Nazi Germany and the Soviet Union. As an able-bodied young man, Lillian’s father was enlisted in the Polish Army and left Warsaw to fight against the invading forces while the rest of the family remained at the Boraks’ villa. When Polish military resistance proved unsuccessful, Stanisław returned to Warsaw and Lillian, Basia, and Wanda returned to their apartment.