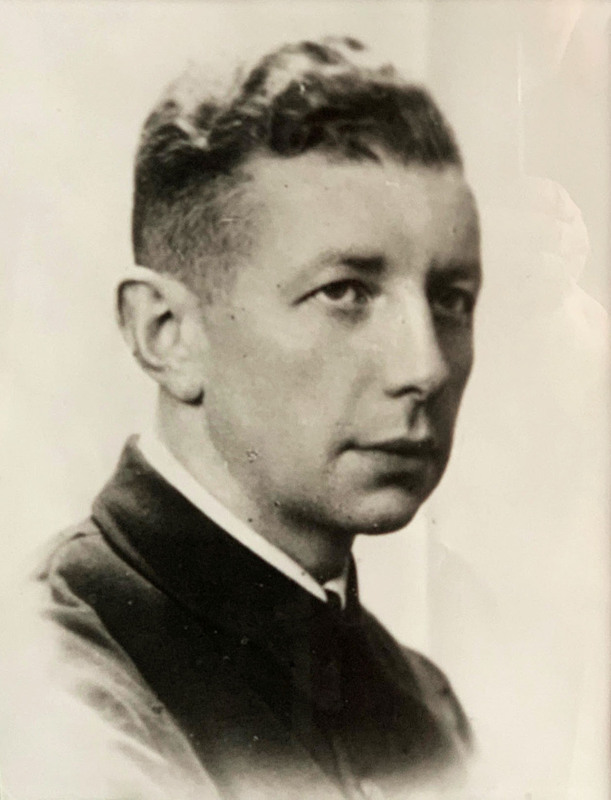 Photograph of Lillian's father before WWII.

While the Boraks family sought refuge in the villa, the Gestapo had made their way into Warsaw and sought out the homes of wealthy and influential Jewish families. Lillian returned home to find the apartment in a state of chaos. She recalls valuables having been stolen and china smashed on the floor. Upon investigating her own room, she found her books and stuffed animals torn apart and the eyes gouged out of her dolls in an act that serves no purpose other than to threaten and dehumanize. Despite all of this, Lillian’s parents were able to return a sense of order to the apartment and they continued living there for some time.

Unfortunately, this wasn’t the only change Lillian experienced upon returning to Warsaw. She describes a morbid change to the air as SS officers roamed the streets with their black uniforms and red armbands. The walks Lillian and her father would take through the city were now muddled with alternate routes through side streets to avoid them. It wasn’t long before her parents were forced to wear blue and white armbands identifying them as Jews, making it even harder to avoid attracting attention.

During the remaining weeks within their apartment, Lillian recalls frequent air raids -- some in the middle of the night -- and an eerie siren prompting them to seek shelter in basements and cellars. Into adulthood, the whine of an ambulance still reminds Lillian of those sirens.

An excerpt discussing the Warsaw Ghetto from Lillian Boraks-Nemetz' interview with Irene Dodek for the USC Shoah Foundation on April 14, 1998, in Vancouver, BC. Closed Captions available and autogenerated by YouTube.

Life in the Boraks family apartment grew more dismal as each week passed. Jewish professionals were gradually banned from their positions, severing their family’s source of income and stripping Stanisław of his influence in Warsaw’s legal community. Plagued by air raids, SS presence, and increasingly strict laws prohibiting the freedoms of Polish Jews, Lillian found herself spending most of her time trapped within the apartment. By 1940, the time had come for Lillian’s father to announce that they were no longer allowed to live in their family home and were required to move into the Warsaw Ghetto. Packing only a few essential items -- some clothing and dishes -- the Boraks family moved into an apartment on Elektoralna Street, which they would share with four other families.

Lillian, Basia, and their two parents were forced to share one room in the apartment while the remaining rooms were occupied by four other families. Lillian estimates approximately 25 people lived within the apartment equipped with only one bathroom. Her description of life in the apartment is one that induces a sense of claustrophobia, not just from the physical presence of others, but from her description of constant sound likely worsened from the imposed curfew. Thin walls did little to block the smell of so many people and the constant talking, crying and yelling that surrounded them. She describes the presence of blackout shades used to prevent the light from the apartment becoming a target during an air raid, which could only have made the apartment seem smaller and more bleak. Endless noise and food scarcity made it difficult for her to sleep.

Despite the hardships, daily life continued within the ghetto and Lillian recalls early attempts to continue children’s education. For a brief period, a handful of teachers opened a school in one of the cellars where children would be taught in secret. Eventually, this was discovered, the school was closed, and the teachers were deported.

As is to be expected, the conditions of life within the ghetto created an ideal environment for the spread of illness and disease. Lack of access to proper hygiene and medical care resulted in several outbreaks of epidemic typhus, a bacterial infection spread primarily through body lice. When left untreated, the early flu-like symptoms of typhus develop into a full-body rash followed by meningoencephalitis and eventually death. As an outbreak swept through Lillian’s neighbourhood, she recalls her building and street becoming quarantined and her mother closely combing through her and Basia’s hair inspecting them for lice.

Although Lillian often spent her time playing in apartment courtyards with other children, her life was guided by strict rules necessary for their survival. Worried about typhus and other diseases, Wanda taught Lillian to not get too close to other people. She was required to be mindful of where she went, when she talked and what she said. Self-expression and self-identity became unaffordable luxuries as Lillian was continuously exposed to chaos and deprivation. Seeing a woman jump to her death or losing a playmate to typhus were constant reminders of the fragility of life and the potential consequences of a misstep. 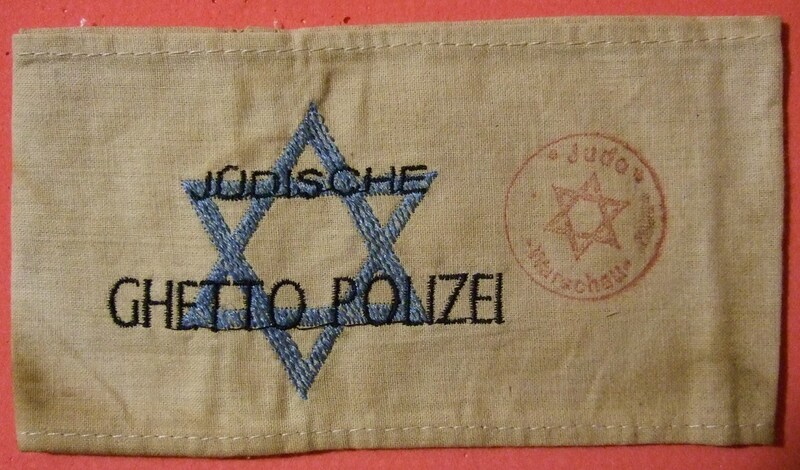 Armband worn by the Jewish Ghetto Police in the Warsaw Ghetto.

Despite the difficulties of life in the ghetto -- or, perhaps, as a direct response to it -- Lillian’s immediate family began to gather with her maternal grandparents for Shabbat and Rosh Hashana. Lillian describes these gatherings not just as social events, but as ones necessary for survival. As her family became more observant, Lillian developed her understanding of what it meant to be Jewish. However, this new piece of her self-identity was being pulled in two directions: the unity and security of the resilient Jewish community helped to offer comfort, while the dehumanization and persecution of the Jewish people caused Lillian to see herself as inherently vile and inferior.

The struggle of daily life in the Warsaw Ghetto was frequently punctuated by housing raids as the SS and gendarmes expedited the deportation of Jewish people to concentration camps. When a raid took place, it occurred within a predetermined section of the ghetto and with no advance warning to the residents of that area. Lillian remembers the stomping of boots as soldiers forced their way into the apartment and ordered her family at gunpoint to take their identification cards and line up in the courtyard. Line-ups of people would be forced to walk to the Umschlagplatz, a railway assembly point where they would be forced into cattle cars and sent to Treblinka or Majdanek where they would be exterminated. Over 300 000 people living in the Warsaw Ghetto met this fate.

During her eighteen months living in the Warsaw Ghetto, Lillian had been in several of these lines, yet had been far enough near the back that the deportation quota would be met before she and her family could arrive at the assembly point and they would return to their apartment. As these quotas increased and the population of the ghetto gradually dropped, the Boraks family found themselves in a line that they would not have survived, had Stanisław not encouraged them to run out of line and hide within an empty apartment until the raid had ended. As a family with two young children, their only hope of survival was to escape the ghetto while there was still a chance.

Lillian Discusses Her Father and the Warsaw Ghetto

Click to hear Lillian speak about her father's role in the Warsaw Ghetto and the struggles she faced during imprisonment.

Both of Lillian’s parents were able to find employment within the Warsaw Ghetto, which could sometimes provide the benefit of additional rations, but more importantly, would reduce the likelihood of deportation to extermination camps.

Wanda found a position at the textile manufacturing factory Többens und Schultz & Co. Lillian would often come to work with her mother and hide under the table collecting scraps of fabric while Wanda sewed items like fur collars for the uniforms of the Wehrmacht.

Having been a lawyer before the war, Stanisław was able to find a position as a member of the Jewish Ghetto Police where he was able to offer his family a greater degree of security from raids and deportation as well as more reliable access to resources required for their survival. Although officers were typically appointed by the Judenrat -- the Jewish government within the ghetto -- they were used as an extension of National Socialism, which required the officers to help guide ghetto inhabitants to the Umschlagplatz and ensure deportations were efficient.

Although the ethical quandary of his role within the ghetto hierarchy would haunt Stanisław to the end of his days, he was able to use his position to help provide for children at the Korczak Orphanage as well as arrange for his own daughters’ escape from the Warsaw Ghetto, preventing them from meeting certain death.

Initially intended to be the first to escape, Lillian fell ill and Basia took her place. Through his connections as a lawyer and his position in the Jewish Ghetto Police, Stanisław was able to arrange for a man to carry two-year-old Basia in his arms and smuggle her out of the ghetto through one of the buildings. Once past the walls, she would be transported to close family friends living in the nearby countryside.

Once Lillian had recovered from her illness, her father arranged for her to be transported out of the ghetto next. Before daybreak one morning, Stanisław and Lillian left their home and took refuge in an abandoned building not far from one of the ghetto gateposts. As they waited for the sun to rise, Stanisław explained to Lillian that she must walk down the road and past the gendarmes and Polish Police that guarded the gates. She must not look back and she must not look around. With a small suitcase and shaking legs, Lillian walked past the guards who pretended not to see her. However, the same cannot be said of a young Polish boy who spotted Lillian and began to yell at her. Before anyone could be alerted, a woman whisked Lillian into the side streets and, armed with false papers, transported Lillian to a train station that would take her to stay with her grandmother in Zalesie.

Using these same connections outside the ghetto, Lillian’s father was able to arrange for Wanda to leave the ghetto next. Since the textile factory was located outside the ghetto on Nowolipie Street, Lillian’s mother possessed a permit that allowed her to leave the Warsaw Ghetto to complete her work shifts. One day, Wanda feigned an illness and was met by a Christian doctor who had been a family friend. He provided her with false papers and she went into hiding while she waited for Stanisław, who would eventually escape the ghetto through the sewer system.

Next Section: Life in Hiding