Mixed media collage featuring the Warsaw Ghetto wall, Lillian, Basia, and their parents as well as a poem and illustration written by Stanisław.

It was 1942 when Lillian left the ghetto, was given false papers and a new identity as a gentile girl, and brought to live with her grandmother, Kazimira. Her grandmother had since divorced Arnold Boraks, remarried a Catholic man from Kraków, and relocated to Zalesie Górne. Despite coming from a Russian Jewish family, her grandmother had managed to keep her background a secret and went to great lengths to ensure that Lillian did the same. She was expected to be inconspicuous, not wander far, and avoid talking to anyone else in the village. If her presence was questioned by neighbours, she was simply described as the daughter of a friend.

Although Lillian was now free from the threat of the Warsaw Ghetto, her life of hiding in a village surrounded by Polish gentiles and away from her parents presented new difficulties including household chores -- finding firewood, peeling potatoes, pulling weeds -- that were challenging for a young girl, navigating her step-grandfather's bouts of extreme drunkenness, and living through winters in the Polish villages without adequate clothing.

It wasn’t long before Lillian's curiosity and need for social interaction overcame her and she befriended another girl in the village for secret play dates and book exchanges. Unbeknownst to eight-year-old Lillian, the girl’s father was a Volksdeutsche, known within the village as an informant who would eventually be executed (allegedly) by partisans.

Knowing that there would be a German investigation into his death, Lillian was hidden in a hole in the backyard near the outhouse. For three days and three nights she remained in isolation. Under the guise of picking berries or performing yard work, her grandparents would drop bread or fried onions down to her. Despite hearing the voices of Germans combing through the village, she remained undiscovered.

Throughout the next two years, Lillian and her grandmother continued to hide their identities from their Polish neighbours and relied on Kazimira’s husband to do the same. This imbalance in power created an environment where Lillian was subjected to sexual abuse in exchange for books and bread. In the fall of 1944, Lillian was reunited with her parents and they relocated to another village. 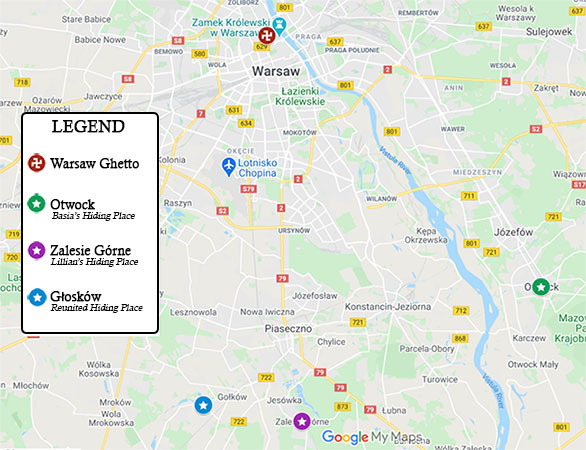 This map shows the villages outside Warsaw that served as hiding places for members of the Boraks family after their escape from the Warsaw Ghetto.

While Lillian hid with their grandmother in Zalesie, Basia had been transported to Otwock to live with a gentile couple who had been close friends with the Boraks family for many years. As a wealthy couple with no children of their own, their home appeared to be an ideal hiding place for Basia. Unfortunately, by the time Stanisław and Wanda were able to retrieve Basia, their friends revealed that she had been found and executed by the Nazis. Stanisław was taken to a small grave where he was shown shoes, socks, and feet that allegedly belonged to his daughter. To this day, there are questions that remain unanswered regarding the host family’s relationship to Basia’s death.

After losing Basia and finding Kazimira in poor health, Lillian’s parents decided it would be safer to bring Lillian to live with them in the village of Głosków. False papers and appearances that didn’t align with stereotypes perpetuated by antisemitic propaganda enabled Wanda and Stanisław to find employment and rent a room within the village. Unfortunately, Lillian’s false documents didn’t match her parents’ and she was forced to adopt yet another false identity. This time, Lillian was able to keep her original false name, but could only refer to her parents as Uncle Felix and Aunt Irene.

Lillian describes herself as having become completely withdrawn, existing as an observer robbed of her childhood. Food continued to be scarce and the threat of danger permeated the air. In the midst of everything, Wanda learned that she was pregnant.

Near the end of 1944, Stanisław, who had been working as a woodsman, was hit by a falling tree and injured for several weeks. With the end of the war approaching and resources becoming increasingly scarce -- exacerbated by Stanisław’s inability to work -- Lillian’s father planned to return on foot to recently liberated Warsaw on his own to see if anything from their old home could be salvaged.

Lillian and her mother remained in the village, weary with hunger, and listening to the Russian troops advancing through Poland. In January 1945, while Lillian and her mother were lying on their beds, a Russian soldier bounded into their room. As the Soviets delivered food and Wanda prepared a meal, Lillian ran to the Polish family they had been staying with and proudly declared, “Hey, I’m a Jew!”