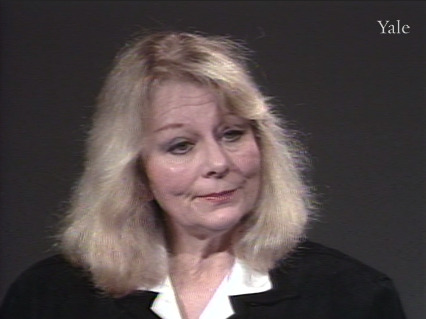 Lillian returned to Vancouver feeling as though her two opposing selves had begun to reconcile into one cohesive self. Her journey was not yet over, but rather had just begun as she met an enlightened witness who offered her an opportunity to initiate a dialogue that she had longed for all her life.

This dialogue began as she met someone she would soon consider to be both a friend and a mentor. A child survivor of the Holocaust himself, he was able to relate to Lillian’s struggle for identity and her difficulty fostering close, stable relationships. By listening with compassion and asking informed questions, he was able to create a space for Lillian to explore her own history without fear of judgement or dismissal. Recognizing the burden of silence during the post-war years and the impact Holocaust trauma was imparting on future generations, Lillian was encouraged to share her story as part of a video testimony project centred in Vancouver, British Columbia. Despite some reservations, Lillian agreed and was able to use this as a tool to begin sharing her past with her children.

Click to hear Lillian discuss the difficulties child survivors are met with as they share their story. She touches on familial conflict and the qualities of an Enlightened Witness and supportive dialogue.

Gradually establishing dialogue with Wanda about their past and sharing information that had previously been kept private enabled Lillian and her mother to begin rebuilding their damaged relationship and see one another in a new light. Lillian was able to recognize that perhaps Wanda’s immersion in her new life was the mask she presented to the world and Wanda appeared to understand that the unbroken silence for so many years prevented Lillian from coming to terms with all the loss and grief that their family had weathered.

Lillian’s journey helped her to develop the skills necessary to self-examine and communicate the difficulties of her past with her loved ones. Learning how to share this with her children was a step forward in closing the distance that existed between them. Although it can’t undo the imprint of one’s past, it enabled Lillian and her children to begin a compassionate dialogue that facilitates a better understanding of how that past is affecting each of their present selves.

Lillian continued with her studies at the University of British Columbia where she received a Bachelor’s Degree and a Master’s Degree in comparative literature. In 1980, she acquired a position at UBC teaching creative writing, which she would maintain until her retirement in 2015.

During this time, she would continue finding opportunities to share her story with the public. In 1989, Lillian and Dr. Robert Krell would co-found the Holocaust Child Survivor Group of Vancouver, BC, which she would chair for the next four years. As a member of the Vancouver Holocaust Education Center’s Outreach Program, Lillian would provide presentations on prejudice and the Holocaust to students in British Columbia. At present, Lillian has contributed to a number of publications on the Holocaust, presented on her experiences internationally, and is featured in several online exhibits and symposiums. Since the 1990s, Lillian has published several books of her own including a youth series, her autobiographical novel, and three poetry collections.

Click to hear Lillian discuss how she views the memories of the Holocaust that she lives with.

Out of the Dark Book Launch

Click to view the book launch of Lillian's latest work of poetry where she reads and speaks on a selection of her poems. Video recorded by Ronsdale Press. 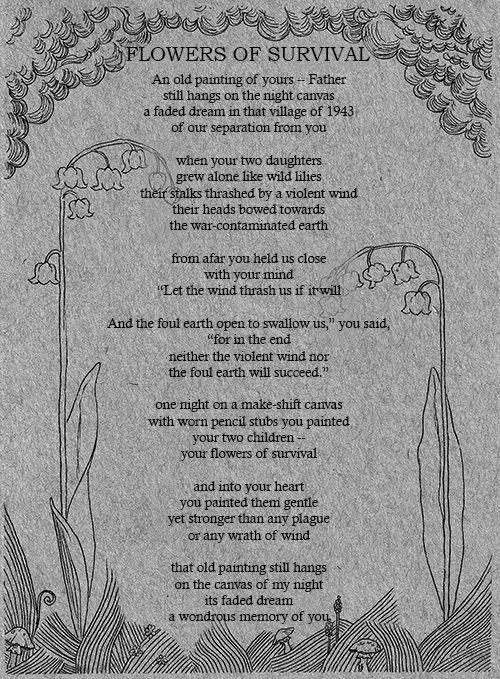 "Flowers of Survival" by Lillian Boraks-Nemetz from her 2020 collection of poems titled Out of the Dark featuring illustration by SW.