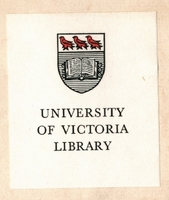 This copy of Long Ago had another life before it was acquired by the University of Victoria’s Special Collections in January 1967. The book belonged to the collection of Emily and Gordon Bottomley, a painter and writer respectively, whose collection was received by UVic from the “Emily and Gordon Bottomley Bequest.” UVic’s library catalogue, however, has very little other information about how this book was acquired. However, thinking about this book’s provenance (a word that refers to a book’s history of ownership from the moment of printing onwards) and its physical production. The history of this particular book is, in a way, its own study of time from its publication date of 1897 to this current moment (May 2022 at the time of this exhibit’s publication). I could not find evidence in any of UVic’s cataloguing information or related collections and archives about how Long Ago was acquired. I spoke to Heather Dean, Associate Director of UVic Special Collections, who speculates that UVic likely acquired the book from bookseller Bertram Rota. Bertram Rota, still active today, specializes in first editions of English literature after 1890 (Rota 212). UVic’s Special Collections regularly bought material from this seller in the late sixties, suggesting that this is likely the source.

Before this book was acquired by UVic, it was owned by Emily and Gordon Bottomley. The Fields were friends with Emily and Gordon Bottomley and the two couples corresponded frequently. Gordon Bottomley was a banker turned poet and verse dramatist. Diagnosed at an early age with tuberculosis, he turned to writing to make a living and struggled with health issues until his death in August 1948. Though his work is little known or studied, Bottomley maintained a network of literary acquaintances and friends, many of which he and his wife hosted at their home in Silverdale, Carnforth, nicknamed “The Sheiling” after the Scottish word meaning “hut constructed for pastoral use” (“The House of a Forgotten Writer”). Bradley and Cooper likely visited their home. Gordon Bottomley lived in Keighley his whole life, further evidence that UVic’s copy of Long Ago was purchased and had not arrived independently in Canada.

Though UVic has a few of Gordon Bottomley’s papers in the Gordon Bottomley collection, none of these items reference Field or Long Ago. However, Gordon’s name does appear in several transcriptions from The Diaries of Michael Field: “Gordon Bottomly [sic] & his wife come to see his ‘dear Sir’ – But he has suspected Michael Field of travesty” (volume 23, folio 100r); “I recall the sharp rose-light of the little roses on the balcony of Paragon in June that dazzled Goscommon, & turned Gordon Bottomly [sic] into a poet” (volume 23, folio 219r). Both of these quotations provide evidence for the friendship (and perhaps conflict suggested by “travesty”!) between the Fields and the Bottomleys. Another mention of Bottomley appears in Mary Sturgeon’s biography of Michael Field, titled Michael Field (1922), which includes a quote from Gordon Bottomley that says that Bradley and Cooper were “…two friends … Who sought perfection and achieved far more” (n.p.). 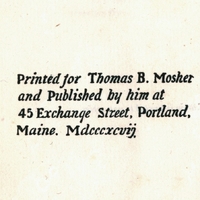 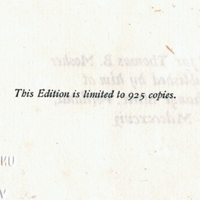 In terms of publication, Long Ago seems part of the slow print movement, a nineteenth-century movement that Elizabeth Carolyn defines as “print that actively opposed literary and journalistic mass production” (2). One way that Long Ago falls into this movement is its extremely small print run. The 1889 edition of Long Ago was published by George Bell and Sons with a print run of 100 copies and the 1897 edition of Long Ago was published by Thomas B. Mosher as part of the Bibelot Series with a print run of 925. The materials used to make this book further indicate that Long Ago is part of the slow print movement. Each book in the Bibelot Series was “printed in italic on Van Gelder’s hand-made paper, uncut edges; done up in flexible Japan vellum, with outside wrappers and dainty gold seals” (“The Bibelot Series”). (Notably, the outside wrapper and gold seal are missing from UVic’s copy.) These details suggest extreme care, labour, and production time spent in the publication process of this book, demonstrating even at the level of production that materiality and time matter  to the reading experience.