A Brief Introduction to Alchemy 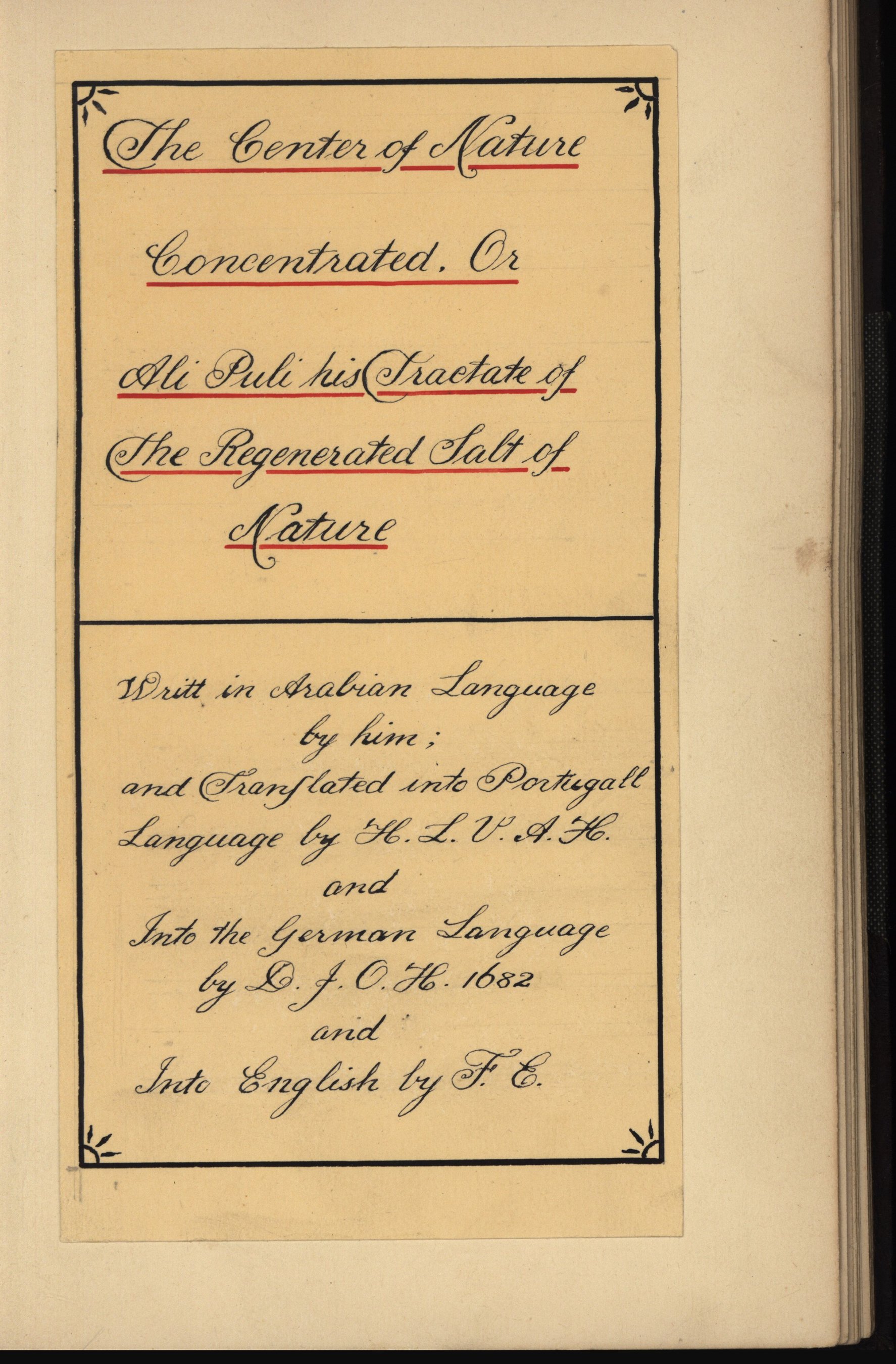 Although alchemy seems complicated to modern readers, most alchemists had two simple goals. First, they wanted to turn base metals, like lead, into gold. Second, they wanted to make the Philosopher’s Stone. To understand how they hoped to do this, let’s discuss their basic ideas.

Alchemy was rooted in the mercury-sulphur theory. This framework was based on Aristotle’s ideas that everything aimed for perfection and gold was the most perfect metal. Metals had two ‘exhalations’ that were particles caught between two elemental states. These two exhalations were philosophical mercury and sulphur, which were different from their ordinary states. Alchemists believed philosophical sulphur and mercury created the Philosopher’s Stone or the essence of life that flowed through minerals, plants, and animals. They also thought that alchemical mercury and sulphur formed every metal in underground caves. The environmental conditions in these chambers determined the type of metal formed. Although the details of the theories varied throughout the ages, these central ideas remained unchanged.

The Philosopher’s Stone was both a primary goal of alchemical practitioners and a metaphorical ideal for writers. It was the perfect balance of the four elements and made of a natural essence that was found in all things. Consequently, the Philosopher’s Stone was so pure that it would remove any corruption it touched, which was the source of its ‘magical’ properties. According to alchemists, these feats included healing and turning metals into gold.

The other major theory to influence alchemy was the works of Paracelsus. He still believed that mercury and sulphur were essential components of metals, but he added salt. Together, these three elements made everything on earth. However, a fondness for older texts persisted in England, and Paracelsian texts were not popular until the mid-seventeenth century.

In the early modern period, chemistry, physics, and biology were not distinct disciplines. Thinkers practiced all three, mixing natural sciences with chemical experiments. They were trying to create a unified understanding of the world.

Alchemy had close ties to biology, astrology and medicine. Paracelsus, an influential thinker for alchemists, also advocated for mineral-based medicine and toxicology. Additionally, some writers said the Philosopher’s Stone had healing properties. Royal courts sometimes employed alchemists not to make gold but to make medicines for their employers. 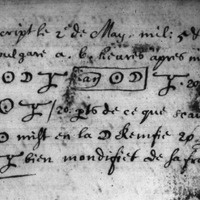 Alchemy was closely related to astrology or astronomy. Planets represented specific metals, and writers used astrological symbols as a shorthand. For example, gold was the Sun, mercury was the planet Mercury, and silver was the Moon. There were seven metals, and each had a planet associated with it. Furthermore, alchemists connected their experiments to the movement of astrological bodies. Specific chemical processes, such as distillation and dissolution, were associated with zodiac signs. Writers also linked their procedures to the movement of stars across the sky and suggested they were trying to mimic the natural world.

More broadly, alchemists believed they were imitating nature. One genre trope was an anonymous alchemist talking to the natural world personified and trying to learn her secrets. They believed their lab work replicated the natural process of metal formation that occurred underground; their beakers and vessels were man-made equivalents to the underground earthen chambers where gold naturally formed.

Overall, alchemy was deeply embedded in early modern natural philosophy, which we now call science. Alchemists drew heavily on biology, astronomy and medicinal sciences when creating their theories. They worked within a wholistic scholarly tradition and a comprehensive understanding of the universe, which heavily influenced their work. 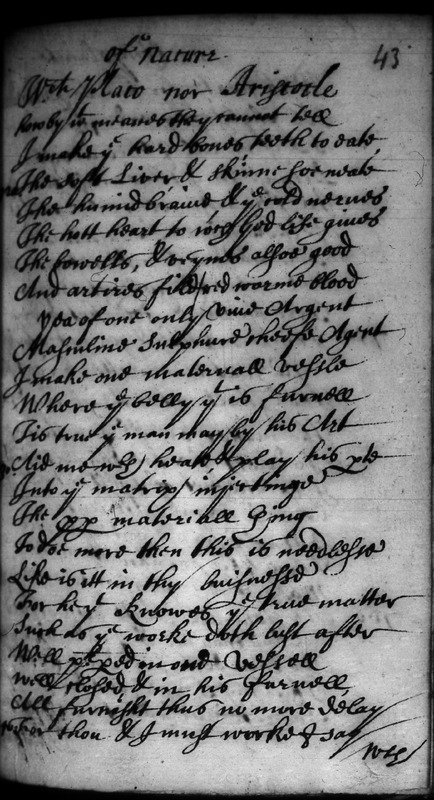 Which, Plato nor Aristotle
How, by what meanes, they cannot tell.
I make the hard bones, teeth to eate,
The soft liver & skinne soe neate,
The humid braine & the cold nerves,
The hott heart to which God life gives,
The bowells & veynes alsoe good,
And artires fild red, warme blood.
Yea, of one only vive Argent,
Masculine Sulphure cheefe Agent,
I make one maternal vessle
Where the belly that is furnell.
Tis true, the man may by his Art
Aid me with heate & play his parte,
Into the matrix injectinge
The p[ro]p[er] materiall thing.
To doe more than this is needlesse,
Like is it in thy buisnesse.
For he that Knowes the true matter
Such as the worke doth lust after,
Well p[re]p[ar]ed in one Vessell,
Well closed & in his furnell,
All furnisht thus no more delay.
For thou & I must worke, I say, 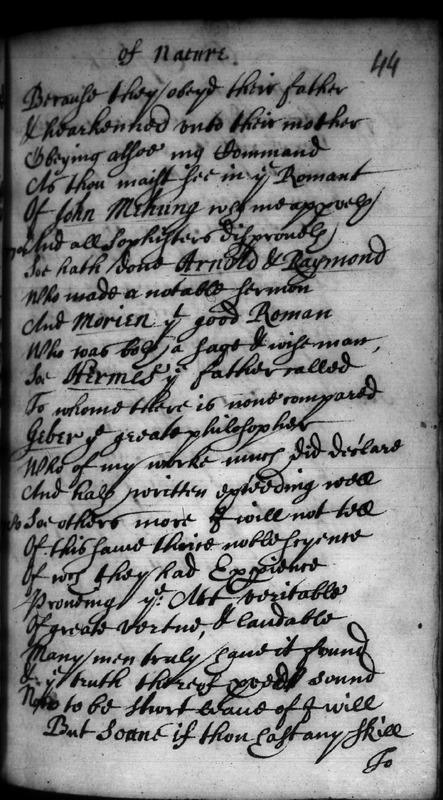 Because they obeyd their father
And hearkenned unto their mother,
Obeying alsoe my Command,
As thou maist see in the Romant
Of John Mehung, who me approveth
And all Sophisters disproveth.
Soe hath done Arnold & Raymond,
Who made a notable sermon,
And Morien that good Roman
Who was both a sage & wise man;
Soe Hermes, the father called,
To whome there is non compared;
Geber the greate philosopher,
Who of my worke much did declare
And hath written exceeding well;
Soe others more I will not tell
Of this same thrice noble science
Of which they had Experience,
Proveing the Art veritable,
Of greate vertue, & laudable.
Many men truly have it found
And the truth thereof proved sound;
Now to be short, leave off I will.
But Sonne, if thou hast any skill

Alchemists often tried to prove their legitimacy and authority in their writings. Even during the early modern period, mainstream thinkers treated alchemists and alchemical practitioners with suspicion. Consequently, writers used a variety of tactics to create authority.

First, writers cited or referenced other authors. In many manuscripts, writers scribbled citations in the margins, pointing to other works. Sometimes editors added additional notes to texts to help readers better understand them. Additionally, authors referenced earlier writers in the text by name whose ideas they used. This shows they wanted their readers to know the source of their ideas and prove their credibility. Although their style differs from modern citations, their intention is clearly to lend credibility to their ideas by referencing authors who already had enduring authority.

Second, alchemists relied on works of earlier generations and rarely challenged their authority. This was part of the broader academic tradition in the Middle Ages and the early modern period. In the scholastic tradition, authority was implicitly given to earlier writers and their conclusions could not be challenged. By returning to the same texts repeatedly, as seen by the Ashmole manuscript, which is a seventeenth-century translation of fourteenth-century texts, alchemists are following the accepted tradition, hence giving it more legitimacy.

Finally, writers sometimes attributed authorship to someone else to either distance themselves or give their work more validity. For example, two of the texts in Ashmole’s notebook are attributed to Jean de Meun, a medieval alchemist, but historians believe this is not the case. Either whoever wrote the poems or some later individual attributed the poems to de Meun. It was likely done to apply de Meun’s credibility to these poems.

Alchemists used these techniques to create a sense of seriousness and credibility around their work. 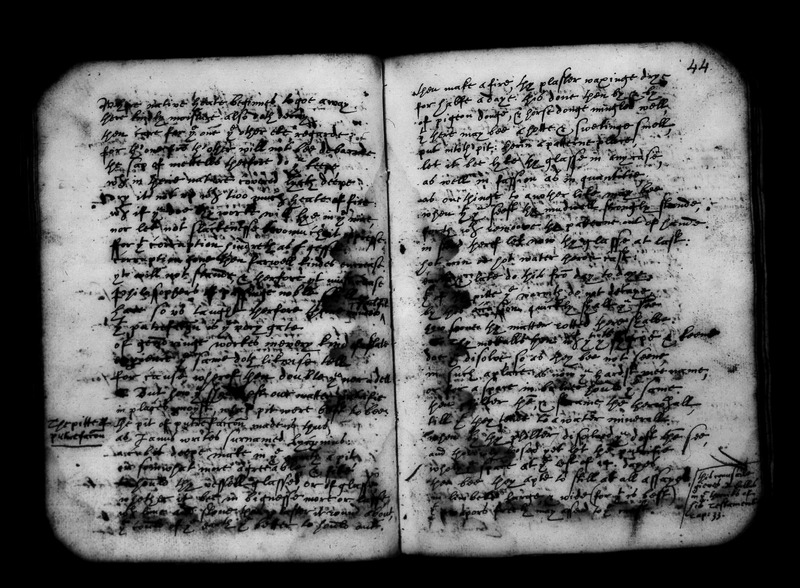 Note the reference to another work in the bottom right corner of the page.

Practical lab work was also a large part of alchemy if it is less obviously attested in written records. There were also strong connections to metal artisans, which further shows the hands-on nature of alchemy.

Related to alchemists’ attempts to create credibility was their lab work. Sometimes, writers or translators specified that they tested the theories using their own lab work. For example, Johan Otto von Hellwing, who claimed to translate a book by Ali Puli into German, tested Puli’s theories “with his own eyes & Hands.” Although this isn’t explicit, the implication is that Hellwing tested them in a lab. This was likely done by von Hellwing or the English translator to create a sense of authenticity and authority. Increasingly, direct scientific observation was used to justify knowledge, especially after Francis Bacon’s work gained prominence. Hence, alchemists drew on other changes in scientific thinking to help legitimize their work.

Additionally, earlier texts feature lengthy descriptions of alchemical processes. Some procedures alchemists frequently described include dissolution, calcination, and fermentation. These descriptions are of processes they believed would create the Philosopher’s Stone. This shows that they truly believed it was possible to create the Stone. However, metaphors or poetic language often mask their descriptions, making them hard to decipher. Still, they call for fellow alchemists to “With Salt Calcine thy mettles on a fire,” which points to a chemical process. These details suggest that alchemists actively practiced what they described, even if they didn’t keep lab notes as modern scientists do.

Another detail that points to the practical component of alchemy is its connection with artisanal metalworking. There is evidence suggesting alchemists in Paris, London and Sweden worked with metalworkers to test the veracity of their gold and shared workspaces. Again, this shows the practical nature of alchemy that has recently come to light.

Overall, alchemy was both a practical and theoretical discipline. Alchemists were deeply interested in exploring the world in both intellectual and practical matters.

Interestingly, water has damaged these pages. It is unknown how they were stained, but perhaps it came from water spillage in a lab setting. This is speculation, however. 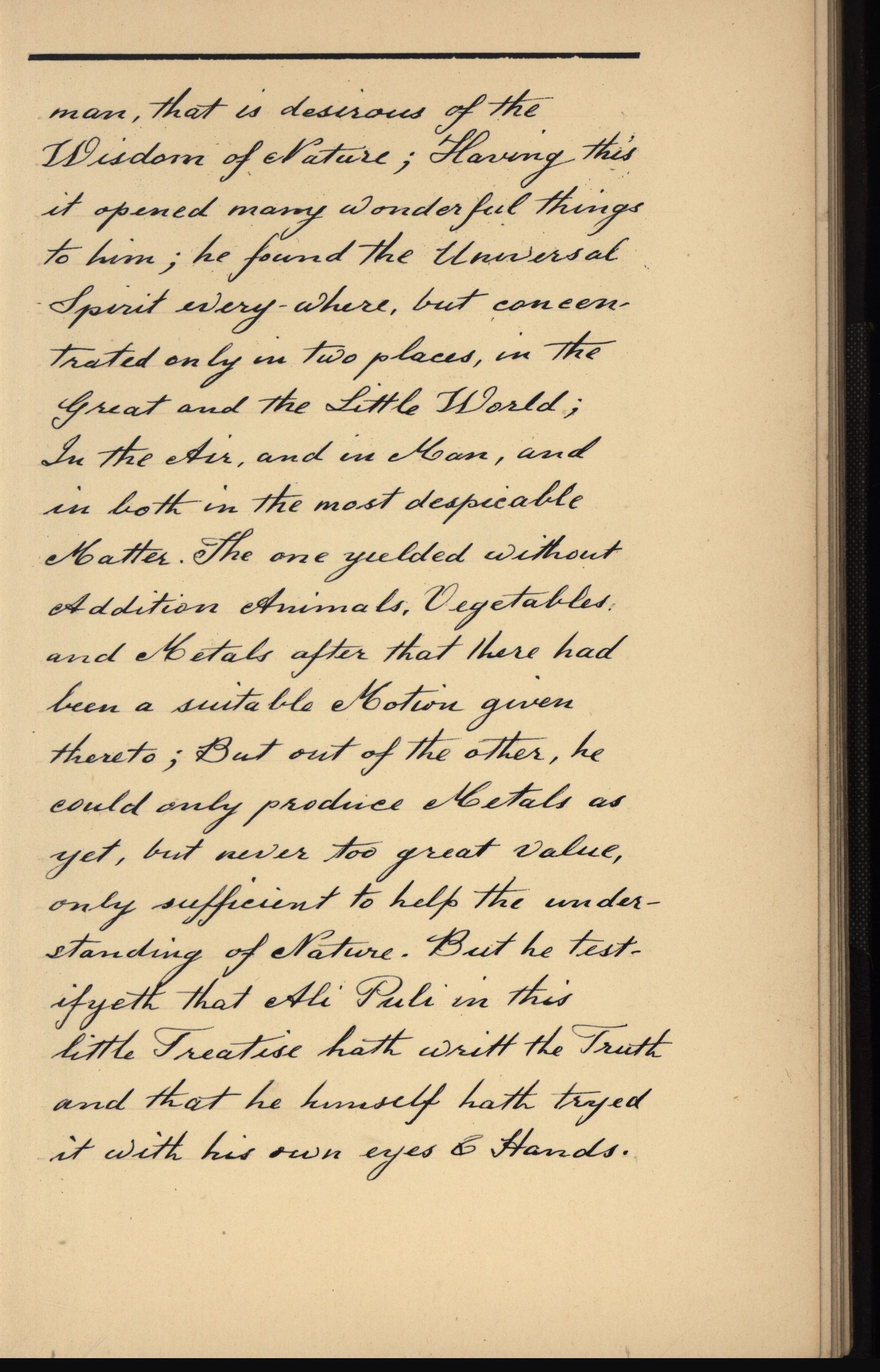