The Motivations of Alchemists

The primary motivation of these men was knowledge. Above all else, they were seeking to understand the world around them and, by extension, themselves.

Sometimes, alchemists explicitly state that they were looking for the secrets of the universe. For example, let's take a look at “The Centre of Nature Concentrated” by Ali Puli. In this work, Puli is seeking to distill the salt of nature that animals use to transform food they consumed into energy. The salt of nature was a substance that allowed life to continue and could turn things into seemingly unrelated items. This seems to be a perfect tool for creating gold, although Puli insists this is not the Philosopher’s Stone, but creating gold is not Puli’s aim. Instead, he is seeking to understand this salt of nature and its role in the world. Throughout this work, Puli emphasizes that he is trying to understand how the salt of nature functions and how an alchemist might regenerate the salt, not create wealth. Hence, knowledge was his explicitly acknowledged aim.

Additionally, alchemical writers gesture at this motivation through their metaphorical conversations. In the poems from Ashmole’s private notebook alchemists speak with personifications of Nature, Reason or Knowledge. In one poem, the anonymous speaker visits the Fountain of Knowledge, presumably to seek alchemical processes. There, he speaks with two ladies called Knowledge and Reason, attempting to extract details of the alchemical process from them. During his pleas, he insists he only wants to understand the universe, although he uses metaphorical language. Two other poems in Ashmole’s notebook are framed as a conversation between an unnamed alchemist and Nature. In her poem, Nature reprimands the alchemist for being so arrogant as to imitate her processes. However, in the alchemist’s reply, he admits he knows little and is seeking to learn from her. Thus, when you look at the poem metaphorically, he is seeking to understand nature and learn from it, even though he is still seeking the stone.

Throughout these poems, there is significant evidence that points to the curiosity and desire for knowledge underpinning their motivations. 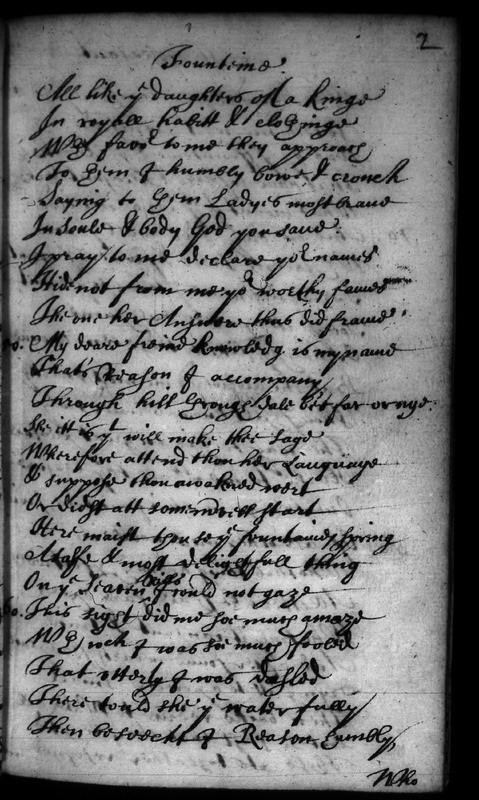 All like the daughters of a kinge
In royall habitt & clot hinge,
With favor to me they approach;
To them I humbly bowe & crouch,
Saying to them, "Ladyes most brave,
In Soule & body God you save:
I pray to me declare your names;
Hide not from me your worthy fames."
The one her Answere thus did frame:
"My deare freind, knowledge is my name;
That's reason I accompany
Through hill, through dale, be 't far or nye.
She itt is that will make thee sage;
Wherefore attend thou her Language
And suppose thou awakned wert
Or didst att some marvell start.
Here maist thou se the fountaine's spring
A salfe & most Delightfull thing."
On the Seaven \Rills/ I could not gaze,
This sight did me soe much amaze;
With which I was soe much fooled
That utterly I was dasled.
There tould she the water fully.
Then beseecht I Reason humbly, 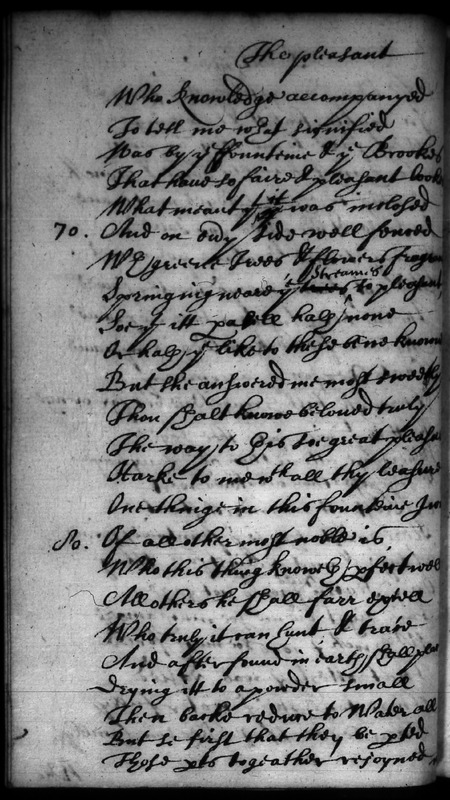 Who Knowledge accompanyed,
To tell me what signified
Was by the Founteine & the Brookes
That have so faire & pleasant lookes;
What meant that it was inclosed
And on every side well fenced
With greene Trees & flowers fragrant
Springing neare the \streames/ so pleasant,
Soe that itt paralell hath none,
Or hath the like to these bene knowne.
But she answered me most sweetly,
"Thou shalt knowe, beloved, truly
The way to this soe great pleasure.
Harke to me with all thy leasure:
One thinge in this fountein, I wis,
Of all other most noble is.
Who this thing knoweth perfect well
All others he shall farr excell:
Who truly it can hunt & trace
And, after found, in earth shall place,
Drying itt to a powder small,
Then back reduce to Water all.
But se first that they be parted,
Those parts togeather rejoyned

Another feature prevalent in alchemy was a strong connection to religion and spirituality. For context, religion was a constant presence in early modern and medieval life. God was an omnipresent force that guided every affair and created the entire world. This worldview carried over into alchemy and the sciences more broadly. 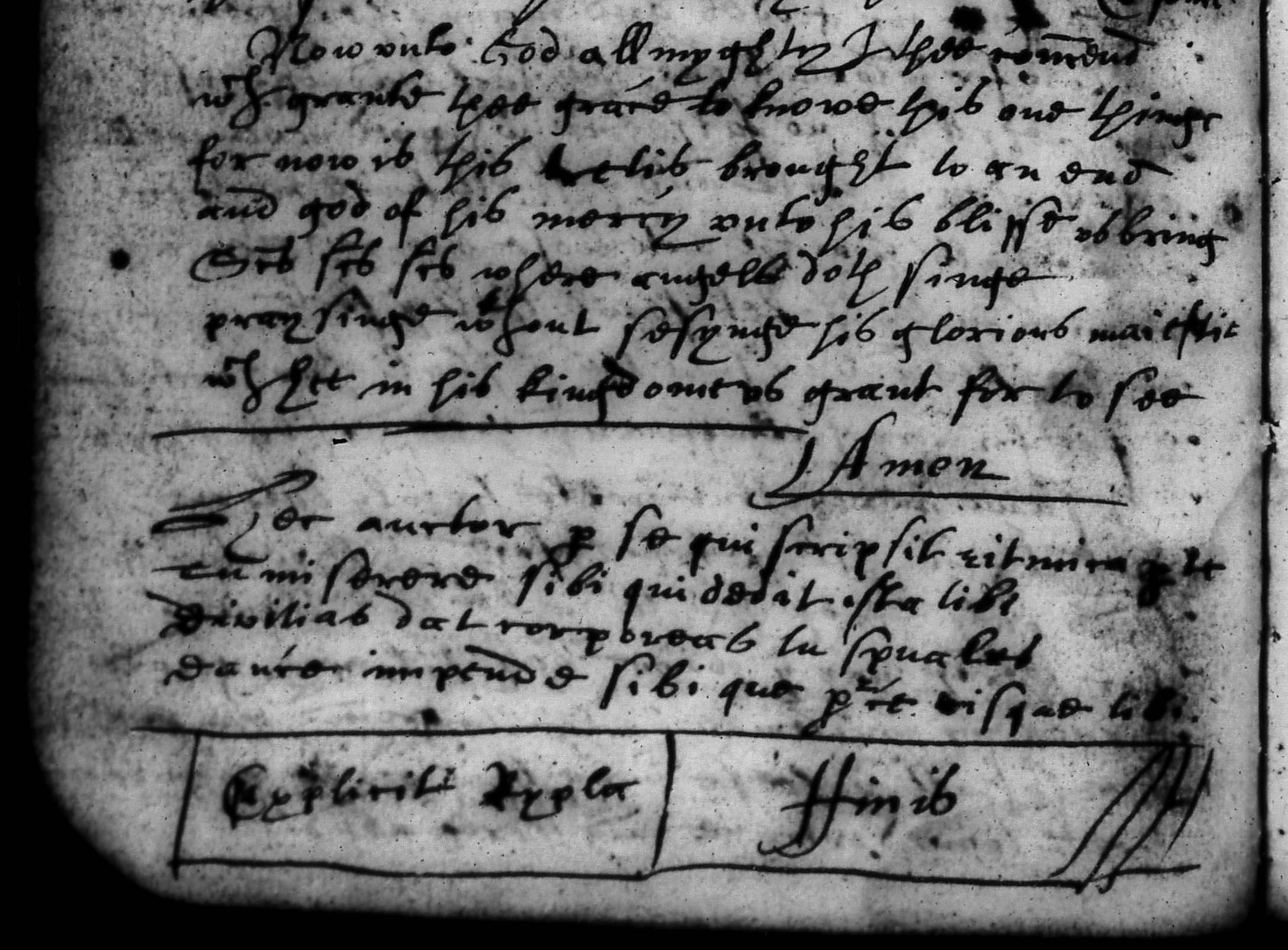 Although they were often seeking to understand the world around them, they typically phrased their enquiries as a desire to understand God’s world. Religious language and references are littered throughout the texts. Alchemists carefully attribute their success to God, saying that only He decides who can succeed and fail. The alchemists are attempting to mimic His natural world and, for some alchemists, religious piety is a critical part of their success. They felt alchemy was a tool for religious understanding and a way to draw closer to God through their work. This side of alchemy is known as spiritual alchemy. Some writers emphasize this more than others, but a belief in Christianity was at work in many texts, even if it was only a passing reference.

Although religion was a central part of their practice, later interpreters overstated its importance. Some people, especially psychologist Carl Jung, interpreted alchemy as only a metaphor for self-transformation or growth. This element was present in alchemical texts, including Ali Puli’s work. In “The Centre of Nature Concentrated,” Puli describes how an individual must know themselves before they can understand the secrets of the universe. This statement points to the self-reflective nature of some alchemical works, but it isn’t as common as Jung believed.

Spiritualism and religion were motivators present in early modern alchemical texts, but they were not the primary goals of alchemy. To a large extent, alchemy was practical, seeking answers to scientific questions. This focus does not exclude the religious motivators but reframes them.

Most perfect of all: this is man,
The which in three degrees doth scann.
More done hath he, than you Dame, have,
When that to man a soule he gave:
Faire & of Immortall substance,
Adorned with Intelligence
And without all dimensyons,
Nor yett subject to passions
Of our body, which bounded is.
But by Sensuality tis
To evill & to sinn turned
By the body, which is stained
By disordered Affection;
Soe suffers Condemnacion
If that Grace be not obteined,
Which from God comes & bestowed
For the goodnesse of the soule, more
Than of the body. Dame, therefore,
The cheife perfection of man
Comes not from you, but itt doth stann.
As I doe say in verity,
You make not the humanity.
But the vessle which is humane
You make, & need helpe of noe man. 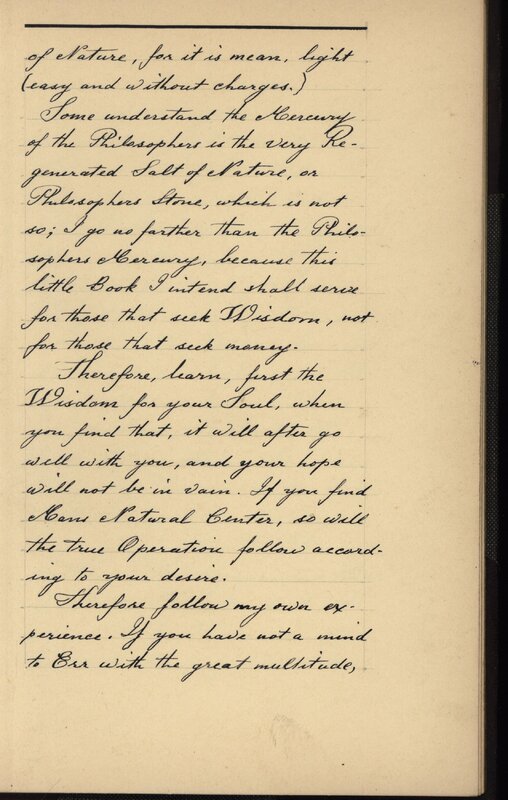 Turning lead into gold was a goal of alchemy, but there was considerable skepticism both within alchemical circles and among outsiders. However, alchemists questioned motivations rather than methods.

Understandably, some alchemists only wanted to create gold and enrich themselves. Sometimes they were independent workers, and other times royal courts hired them. Regardless, certain alchemists only wanted to gain personal wealth, not any deeper knowledge of the world. However, there was an element of disdain for these wealth seekers from ‘real alchemists.’ These alchemists, including Ali Puli, who asserts that his book is “not for those who seek money,” believed that riches were an improper motivation for alchemists. They were devoted to wisdom and knowledge, and consequently, there was no toleration of men looking for quick monetary gains. Ironically, this financial aspect of alchemy is more common in popular culture than curiosity about the world.

However, the dislike of money-motivated gold-seekers points to another belief in alchemists. Alchemists truly believed it was possible to create gold out of other materials and they didn’t want this knowledge to fall into the wrong hands. Additionally, there are reports of men who claimed to create gold, largely for royal courts, being discredited when they failed to do so. These incidents likely prompted both the attempts to establish credibility and discredit those seeking money from the Stone or gold. Alchemists had reputations to uphold and wanted to protect their sacred procedures from being used for ill-will or imitated by chatelains.

Alchemists believed there were right and wrong motivations for engaging in alchemy. Seeking profit was clearly not an acceptable motivation for most writers and they were consequently quite skeptical of those who engaged in gold making for this purpose. However, alchemists were not completely divorced from worldly concerns.

Some alchemical writings do discuss or point to political concerns. As mentioned, royal courts were key employers for alchemists, which brings the potential for political influence.

Edward Cradock’s “Treatise Touching the Philosopher’s Stone” dedicates the work to Queen Elizabeth I from the first line of the poem. He seems to offer the stone as a jewel to the queen to seek her approval. Although Cradock never states this, he was likely seeking some sort of patronage to supplement his income working at Oxford University as a theologian. He was also a more spiritual alchemist because of his background. Further supporting the possibility that Cradock was seeking patronage from Elizabeth was his connection to one of her advisors, James Dee. Dee was also an alchemist and met Cradock in 1581 at Oxford, thus establishing a potential connection to Elizabeth’s court. Hence, political patronage motivated alchemists, even if it was a secondary concern.

Additionally, political events and timing likely influenced interest in alchemy. William Backhouse translated three French poems during the 1640s, even though Elias Ashmole only wrote them down later. The 1640s were turbulent times as the English Civil Wars raged on and off during the decade. Backhouse had retreated to his country estate and turned to alchemical translations as an amusement or distraction from the surrounding chaos. While currying political favour was not his motivation, the political turbulence of his times strongly influenced Backhouse.

Alchemists were not completely divorced from the world around them, and their practice was influenced by political events. Sometimes, they were even seeking patronage from royalty to advance their careers or supplement their incomes. Still, this was seen as a secondary motivation to seeking true knowledge. 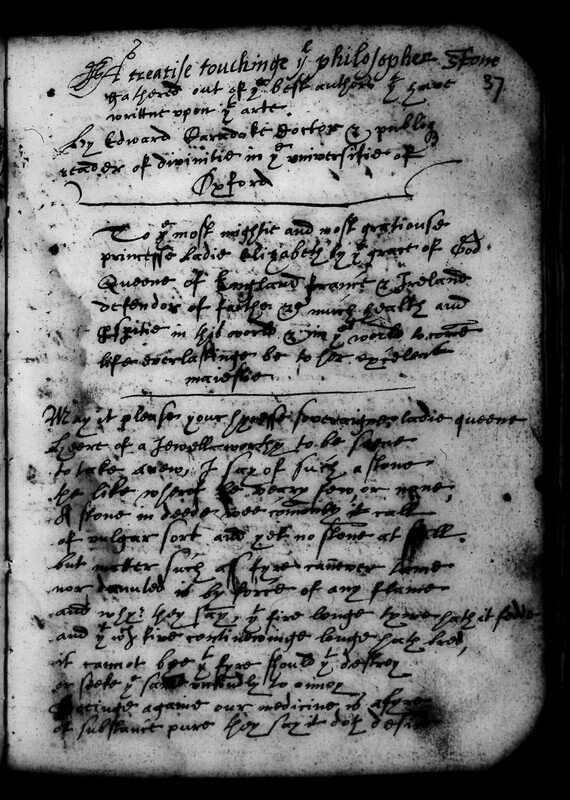 A treatise touching the philosopher stone
gathered out of the best authors that have
written upon that arte.
by Edward Cradock; Doctor & public
reader of divinitie in the universitie of
Oxford

To the most mightie and most graciouse
princesse, Ladie Elizabeth by the grace of God
Queene of England, France, & Ireland,
defender of faithe & much healthe, and
p[ro]sp[er]ity in this world, & in the world to come
life everlasting be to her excellent
magiestie.

May it please your highnesse, soveraigne ladie queene,
here of a Jewell worthy to bee seene
to take a view; I say of such a stone,
the like whereof be very few, or none.
A stone in deede wee commonly itt call
of vulgar sort, and yet noe stone att all:
but matter such as fire can never tame,
nor danted is by force of any flame.
and why? They say, the fire long time hath itt fed,
and that which fire continuing long hath bredd,
ytt cannot bee that fyre should that destroy,
or seeke the same unkindly to annoy.

Seeing againe our medicine is a fire
of substance pure, they say itt doth desire